A significant value-add an MBA brings to bear in human interactions, is the ability to think critically or systematically if you like. Here are my critical thinking takeaways from our Analysis of Business Problems (ABP) classes:

1. Push boundaries. Curiosity is a key factor of learning.

2. Decision making is a process not an event.

3. Don’t thoughtlessly go with the norm as it is possible for the majority to be wrong.

4. Most people listen to respond, not to understand.

5. The sign of an educated mind, is the ability to hold conflicting decisions.

As our faculty says, ABP helps one make submissions that can be (successfully) taken to the (paranoid) bank (in exchange for money).

Cheers to deepening our critical thinking skills as we continue on this MBA path.

I wanted to travel with a two tier cake; big stuff 20kg weight. I packed it in a strong carton box and supported it as best as I could. When I got to the airport, there seemed to be a well rehearsed ‘we don’t check-in cake’ statement every direction I faced. It seemed like they put all the airline staff in a room and they had to recite this slogan every morning.

Ok you don’t check-in cake, I understand. So what are my options? I get the same reply ‘We don’t check-in cake’. Yes I got that the first time, but what can I do? How do you usually transport cake? '‘Passenger has to carry the cake on the lap'’.

Did you see the size of that box? It can’t enter the tiny space between my body and the seat in front of me, besides it’s a 20kg projectile hazard in the plane. They look at the box, I see the understanding in their eyes, I mean it’s obvious. I thought I was making some progress, till I again got the well rehearsed slogan ‘we don’t check in cake’.

I asked to see someone senior to know what their fears were. I guessed, but they needed to spell it out. Finally, the ‘oga’ explained that they need to be indemnified if anything happened to the cake. Ok great! I am willing to sign an indemnity form. “Really madam?''  ''But we don’t check in cake''.

At this point, I was about to pull out my hair. To cut the long story short. After engaging and re-engaging and making them understand that I knew the risks and was willing to still go that route, as I frankly had no choice; they agreed and handed me the form.

When I saw the form I understood their confusion, cake was not a line item. The form had cameras, computers, television sets and the likes listed. No cake. But still, we need to use our sense na. I signed, checked in and got into the plane.

While trying to get comfortable in the plane, I heard the air hostess bellow my name with the word cake at the end of a sentence. Haba! I was asked to come down from the plane and meet the baggage crew on the tarmac. An important looking man stood there with my signed indemnity  form asking if I knew what I signed. Yes I do, bros I am not dim. He asked for my boarding stub and I was asked to tick fragile and sign again. Also sign on the cake luggage sticker stub itself. ‘Wahala’.

I was then free to go. It might interest you to know that the cake arrived my one hour destination in one piece. Well almost, a few of the stenciled figures fell off, nothing major.

Rules are meant for a reason and that reason should be well known by all enforcers so they will be able to share knowledgeably to the receivers. Some scenarios simply have to be taken on a case by case basis and not followed foolishly. The basis of the rule has to be fulfilled. The drama ended well this time, but it would be a while before I forget the phrase; ’we don’t check in cake’.

The Christian faith records that the earth and its occupants were created by the spoken word. In human relations, agreements recorded by words are binding on the makers of such agreements. The government regulates human relations using words set out in statutes and other regulatory documents. A soft word has been known to turn away anger while a rash word has been known to aggravate anger. Famed public speakers and renowned writers are so famed for their words. Need one say more then, that words can be used as a catalyst of change and glamour, it all depends on the arrangement and use of the words. A pen which is the traditional means of writing, can therefore be said to be a catalyst of change or glamour. So also are the more modern means like phones, tablets, laptops and what have you?

Of course, even good things can be misused, thus words if not appropriately put together, can shut doors firmly rather than throwing them wide open.

Appropriate words, create the right imagery in one’s mind and make one literally touch the items being referred to in the words. No wonder, the world could be created with words…

Cheers to making your pen your catalyst of change, glamour and other things to be held dear as I strive to do daily.

A decision tree is a tool for analysing a decision in a methodical manner. It provides a picture showing all the connections among choices and uncertainties. It is like a blueprint for the architecture of a decision. And as decision-makers, we would be very helpful if we adopt the use of decision trees the way a builder relies on a blueprint while constructing a house.

Example of a decision tree: 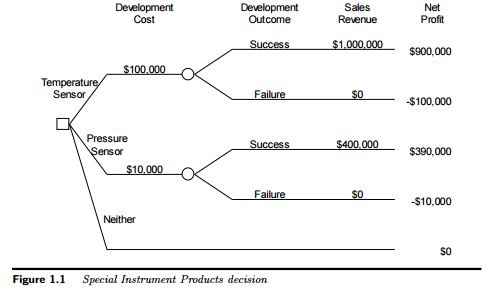 Decision trees are particularly needed in resolving a tough choice under uncertain conditions, for example in choosing which company stocks to invest in with different probabilities of price gain and price losses. The decision tree will show all possible pathways with their probabilities and sequences.

Having written exams at least once every year for the past 32 years of my life, it’s unbelievable that impending exams can still make one feel one typa way.

Exams are meant to be a test of knowledge but they often cause jitters instead. Could it be because of Naija lecturers’ approach of deliberating setting esoteric items for exams? Which make all your studying and comprehension seem like a rude joke?

Anyways, I’m glad our LBS faculty are not like that. Exams here look to be a true test of understanding & knowledge. As they largely require application of principles not just a regurgitation of theories. I dare say that the exams are designed in such a way that even in an open book mode, you may not be able to answer the questions correctly without knowing how to apply the principles - something you will never see in the open books anyways. Smart guys!

Management Communication and  Corporate Financial Accounting (CFA) went down yesterday. And I’m generally pleased with the outcome. No worries of failing even though I can’t really tell what score I will pass with.

Circling back to exams being a test of knowledge, for CFA - it dawned on me during the exams that I do not yet fully grasp the principles around posting of debit and credit entries. Well, though the exams are over, I’m sure going back to my materials to iron that out. ‘Cos ultimately, the point of my N7.2m is to learn organically not just pass exams procedurally.

Cheers to DA & ABP exams in a fortnight

Michael Porter's Forces
by Olabisi Ometoruwa-Miyebi - Saturday, 5 June 2021, 11:33 PM
Anyone in the world

Its funny that i just started hearing of this some days back.. Michael Porter brought about the 5 forces of competitive strategy that show how to analyse a company's competitive environment.

I remain your humble expert, no semi expert ❤️❤️❤️I

Persuasion is influencing others to change their point of view, buy a product, make a commitment or engage on another course of action  The place of persuasion cannot be underestimated

MBA & Multitasking Productively
by Adefolake Adewusi - Saturday, 5 June 2021, 12:14 AM
Anyone in the world

One thing I’m so sure of even with only one (out of six) semesters completed, is that the modular MBA programme enables effective multitasking.

Because the modular MBA presupposes that the candidates are working alongside studying, it means there’s much more to successfully juggle in such little time. And considering that MBA materials can be voluminous, prioritising and strategy is key. It’s not about how much one can read but how well - one can distill salient facts from a truckload of information. This helps at work too. Prioritisation of tasks.

I suddenly realise that in spite of juggling MBA, work, research and professional exams, I can achieve my deliverables in all - and still manage to throw in some me time and time for my loved ones too❤️